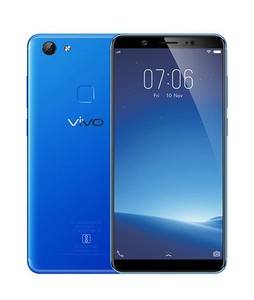 There is nothing too fancy about the design of the vivo V7 and it is exactly this simplicity which makes the smartphone so fashionable. The focus of the vivo V7 is on what is important i.e. the display of the smartphone with the large 5.7-inch display centered on the front with minimal bezels on the sides. On the back, there is a single camera setup on the top left with the fingerprint scanner and logo towards the center. The vivo V7 measures 7.9 mm thick and has a weight of just 139 grams – the lightweight and ergonomic design ensures that the smartphone feels great in the hands. The front is covered with glass (no protection specified) while the smartphone is made up of high quality plastic though it is not as durable to bends and falls as other midrange smartphones, so you should be careful.

The display on the vivo V7 is a 5.7-inch IPS LCD display set at a FullView HD resolution and a crisp pixel density of 282 pixels per inch. The colors are pleasing, and the contrast is great but the low pixel density does mean that it is not the sharpest display out there. Though for the price, there is not much to complain since there were no noticeable signs of pixilation. The sunlight legibility is poor though so if you are looking for a smartphone to use outdoors most of the time then this could be a deal-breaker.

The vivo V7 comes with the lower midrange chipset from Qualcomm, the Snapdragon 450 with an octa-core processor, an Adreno 506 GPU, and 4 GB of RAM. The snappy chipset on the vivo V7 is capable of handling routine tasks and games easily without any signs of lag. The benchmark scores are impressive too since the vivo V7 scores 54970 and 9987 in AnTuTu 6 and Basemark X respectively which is on par with other midrange smartphones.

The vivo V7 comes with a standard camera setup on the back with a 16 MP shooter with phase detection autofocus and HDR. The 24 MP selfie camera is what is impressive though since it can take high-resolution selfies with great level of detail. The image quality of the back camera is decent with good colors and pleasing contrast though low light photos have a lot of noise in them. The overall performance of the back camera is average but the front camera impresses, particularly if you love taking group selfies