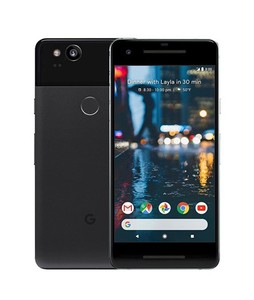 The product Google Pixel 2 is not available in any major online store in Pakistan. The lowest price was Rs. 43,189 in Nov, 2022.

Google looks to show the true power of Android through its very own power-packed beast, the Google Pixel 2. The Google Pixel 2 features a brilliant display, stock Android, a powerhouse processor, and a spectacular camera to provide you with everything you need under a single hood.

The Google Pixel 2 is the successor of Google’s first-ever smartphone, the Google Pixel. The beautiful smartphones are known for its excellent performance, intuitive features, and its spectacular camera which is rated as one of the best smartphone cameras of all time. Overall, it is a flagship that is native to Android and maximizes its potential to the fullest.

Google has made use of the AMOLED screen for the Google Pixel 2’s 5.0-inch screen with an FHD resolution. The display is very sharp with vibrant and highly accurate color reproduction. The 95% DCI-P3 coverage and Always-on display add to the finesse of the Pixel 2’s display which is adequate for watching high-resolution movies and playing HD games.

In terms of design, the Google Pixel stands out as different, if not eye-catching. While others are in the race towards a completely bezel-less design, Google does not concern itself much and instead has the speaker on the front with the display centered on the middle. The body is made up of aluminum and there is a partial glass on the back of the Google Pixel 2 as well. The front glass is not rounded and is instead flat as well. However, in terms of weight, the Google Pixel 2 is much lighter than other flagships, particularly the iPhone X and Samsung S8, with a weight of just 143g. There is a rear-mounted fingerprint scanner on the smartphone. Overall, the design might not stand out as the most appealing to everyone but the Google Pixel 2 is a solidly built smartphone that looks to stand out as different.

The Google Pixel 2 comes with the Qualcomm Snapdragon 835 with an Adreno 540 GPU and Android Oreo 8.0. The Pixel 2 is a powerhouse and the optimized Android version ensure an improved performance. The benchmark scores for the Google Pixel 2 are 4131, 38794, and 168648 in Basemark OS II 2.0, Basemark X, and AnTuTu 6 which are right in the top charts for the 2017 flagships.

The camera is the highlight of the Google Pixel 2. The 12.2MP back camera is equipped with dual-pixel laser autofocus and it manages to produce astonishing results in both good lighting and low lighting. The image quality is very sharp with the photos coming out to be extremely detailed and natural. The dynamic range is impressive too due to the HDR+ feature of the Google Pixel’s camera. The front camera is a 8MP shooter that can produce high-quality portraits and selfies with a good level of detail. Despite a single camera on the front, the Google Pixel 2 camera can blur out the background as and when needed to put the focus on the central object.

The Google Pixel 2 sports a 2700 mAh battery with the energy-efficient AMOLED display so the smartphone has an endurance rating of 75 hours. On average, you should to last through an entire day of moderate to heavy use with a fully charged Google Pixel 2. To add to the satisfaction, there is fast charging support as well which can help you charge the Google Pixel 2 from 0 to 43% in 30 minutes and from 0 to 100% in just 1.5 hours.

In terms of connectivity, Google Pixel 2 comes with the latest version of Bluetooth i.e. 5.0 with support for NFC and a USB 3.0 Type-C connector. There is no 3.5 mm audio jack though which means you will need to make use of wireless headphones or a convertible to be able to connect your headphones with the Google Pixel 2.