Intel prices have gone down 1% in the last 30 days. Intel Core i5 10600 is available at very limited stores online.

The Intel Core i5 10600 is one of Intel’s mainstream consumer-grade offerings. Think of the 10600 as the smaller brother to the 10600K. Intel’s i5 lineup is quite successful, thanks to the affordable price and overall price to performance ratio. We expect the Core i5 10600 to be quite popular, especially with Intel enthusiasts. Considering the Core i5 10600 price in Pakistan, it might prove to be a great processor. It’s a great processor because of three things: gaming performance, ability to handle production workloads, and overall value. There is a bit of a difference between the Core i5 10600 and 10600K. The “K” in the latter represents overclocking. As you can probably guess, the 10600 does not support overclocking and has a lower TDP. Other than that, they are mostly the same.

The prices are collected from the best online stores in Pakistan like Pakdukaan.com, Daraz.pk - updated Jun 2021. 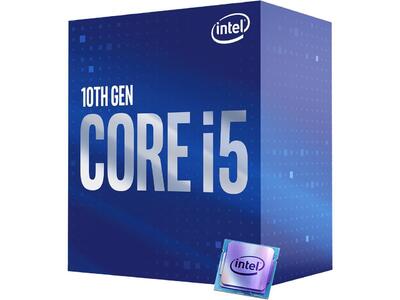 Think of the 10600 as a lower-priced alternative to the 10600K. For people who don’t need overclocking, this is an excellent processor. Furthermore, it allows you to save money by getting an H410 or B460 motherboard. This way, you don’t end up overspending on a fancy Z490 board. B460 boards still look great depending on the price, and apart from overclocking, they’re just as good.

There is one more difference, however. Z490 allows you to push the RAM speed to a certain limit. With other chipsets, you’re stuck with the limit that Intel decides. Thankfully, RAM speed is not a major dealbreaker for most people buying PC parts on a budget. If this were a pricier processor, that would be a different story.

For simplicity’s sake, let’s go over the specs. The 10600 has six cores and twelve threads. It has a max TDP of 65W and can boost up to 4.8GHz. The base frequency or base clock is rated to be at 4.1GHz. It’s a Comet Lake processor based on the 14nm process. For integrated graphics, you get Intel UHD 630 graphics. Other than that, you get 12MB of L3 Smart cache.

So, as you can see, the 10600 is quite similar to the 10600K in every regard. This also translates to overall gaming performance. There is virtually no difference between both of the processors. Even after testing across a wide range of games, the results stayed the same. However, the 10600K has a higher power limit, so it performs better in production-based workloads.

Even then, the difference isn’t that major. If you don’t want to overclock your processor, the 10600 is a great option to save some cash. We can recommend it for people who want to game at high refresh rates in 1080 or even 1440. You can also use it in most production-based workloads.