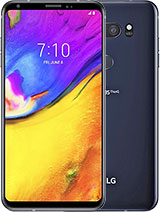 The LG V35 ThinQ is the perfected version of LG’s flagship offering of 2018 and it is the second premium smartphone that the company has launched in the same year. With the all-powerful Snapdragon 845 chipset and the same great design and camera from its predecessor, the LG V35 ThinQ is one of the best smartphones that you can get your hands on in 2018.

Unlike most other leading smartphone manufacturers, LG has chosen not to adopt the notch for its flagship. Instead, LG makes use of a beautiful curved edge-to-edge display on the V35 ThinQ with a front and back glass and aluminum frame. The build quality is exceptional and the LG V35 ThinQ is easily one of the most durable smartphones of 2018 since it is MIL-STD-810G compliant, IP68 certified, and it has Corning Gorilla Glass 5 protection, too! So, basically, the LG V35 ThinQ is waterproof, drop-proof, shockproof, fireproof, and whatever else you can think proof!

The reiterated 2018 flagship for LG sorts things out in terms of performance with the Qualcomm Snapdragon 845 chipset. There is a marked improvement in terms of overall smoothness in the V35 ThinQ as compared to its predecessor, the V30S ThinQ. The LG V35 ThinQ has an impressive AnTuTu 7 benchmark score of 270000 which is right up there with the best. For power users and mobile gamers, the LG V35 ThinQ should be able to handle HD games and heavy multitasking smoothly without fail.

The camera on the LG V35 ThingQ is almost identical to its predecessor with a familiar 16 MP + 13 MP dual camera setup on the back and a single 8 MP selfie camera on the front. Despite the lack of a telephoto camera, the LG V35 ThinQ’s camera produces images which are quite pleasing to the eye with excellent colors and contrast. The 13 MP wide-angle camera can be used to capture entire scenes with the same level of detail as the primary 16 MP camera but it lacks optical image optimization and autofocus. In low light, LG makes use of noise reduction technology to ensure that the images are crisp and clear but the results are still not on par with the likes of the Samsung Galaxy S9 or Google Pixel 2. The selfie camera, on the other hand, has two viewing modes that can be used to adjust the angle at which the pictures are taken, though in reality, there is very little difference in the photographs.

The LG V35 ThinQ has a non-removable 3300 mAh Lithium-ion battery that has a good endurance rating. The battery is on par with other flagships out there and you should be able to get through most part of your day with a fully charged LG V35 ThinQ. The addition of QuickCharge 3.0 is welcome since it can take the phone from 0% to around 45% in just 30 minutes.

As for connectivity, LG has everything covered with its flagship smartphone – the LG V35 ThinQ has Bluetooth 5.0, FM Radio and RDS, NFC, a 3.5mm audio jack, and USB 3.1 Type-C.