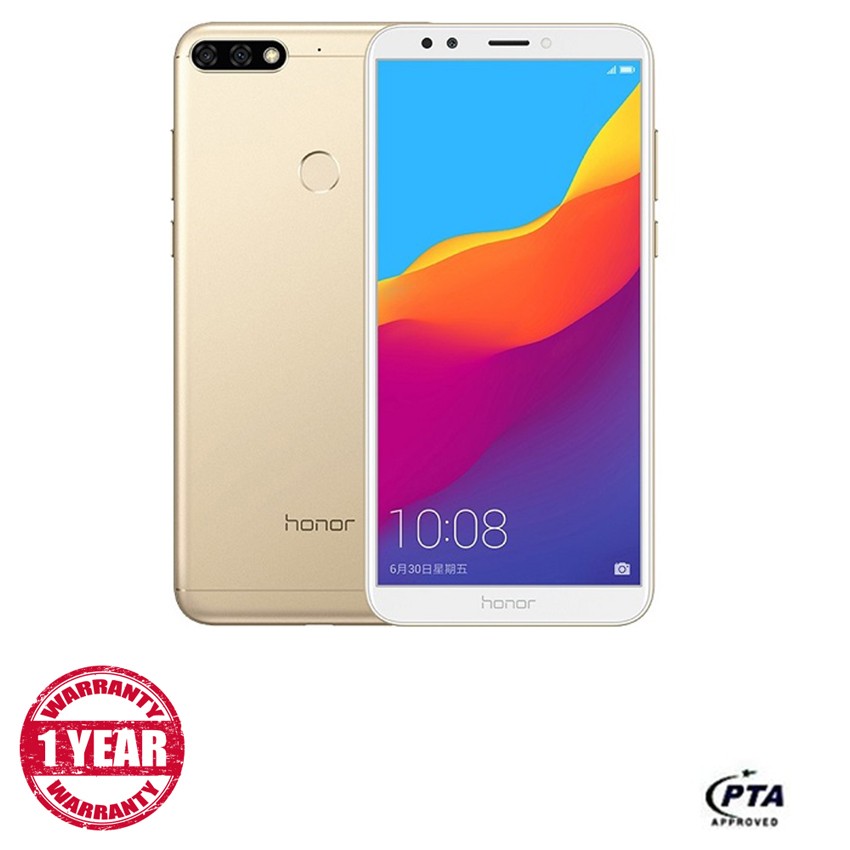 The product Huawei Honor 7C is not available in any major online store in Pakistan. The lowest price was Rs. 22,199 in May, 2020.

The Honor 7C is a well-built phone with a sleek look. It is loaded with features making it a good phone that provides both style and performance at an affordable price. However, the phone lacks in performance in some parts due to bloatware. Both the cameras are also average at best.

After releasing the titanic Honor 10, the company decided to fill the gap in the budget market with two handsets namely Honor 7A and Honor 7C. Both of these phones are equipped with the latest trending features such as face unlock, dual rear cameras, and 18:9 displays.

The Honor 7C is priced a little above the Honor 7A because of its larger screen size. Rest of the specifications and features are pretty much the same on both phones. Let's have a detailed look at whats on offer here.

The Honor 7C doesn't disappoint with its design. It has a back metal plate which gives it a premium and solid feel when you carry it in your hands. Couple this with a 2.5D glass on the front, you'll feel like you have landed your hands on a high budget phone.

Perhaps the design is the only saving grace of the Honor 7C thanks to the premium materials used to make this phone. Other than that, the design is quite simplistic with no bloat around the phone. You'll see the dual camera setup at the top with a fingerprint sensor in the middle.

The Honor 7C is certainly lacking in a bit of performance especially if you try to play games on it. It is surprising to see that the phone ditches the more popular processor Honor phones are usually equipped with for a subpar Qualcomm Snapdragon 450 which is now ancient.

However, thanks to 3GB of RAM, you'll still be able to get most out of the phone in terms of multitasking. The phone is also running the latest edition of Android and Emotion Engine which is a great thing for a phone in 2018.

As far as the display is concerned., the large 5.99-inch HD+ display is good when you see it up close. However, as soon as you take it outside in bright light, the display starts to show how much it can be lacking. The resolution is also not impressive on the phone.

The battery life of the phone is not entirely impressive but it can last you about 10 hours if you constantly watch HD videos on it. This is mostly because the screen has low resolution and the battery doesn't have to power too many pixels.

The lack of quick charging on the phone will leave a few disappointed but the good news is that it requires a charge of 2 hours to be fully powered up.

The camera results of the Honor 7C are just average. You'll get good photos as long as there is enough light in the environment, but as soon as you enter a place with bad light, don't expect to see a good photo coming out of the phone.

The camera app itself is fairly easy to use and has some useful features but is severely lacking in professional features that give photos the oomph it needs.

The front 8MP snapper is also average at best. You'll get decent results in good light situations. Expect to see a lot of noise, grain and other problems appearing on snaps that you take in low light situations.

The Honor 7C is a well-built phone with a sleek look. It is loaded with features making it a good phone that provides both style and performance at an affordable price. However, the phone lacks in performance in some parts due to bloatware. Both the cameras are also average at best.