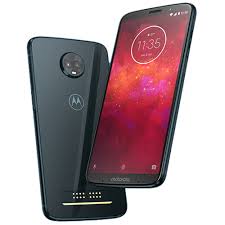 The product Motorola Moto Z3 Play is not available in any major online store in Pakistan. The lowest price was Rs. 25,499 in Oct, 2022.

The Motorola Moto Z3 Play offers the convenience of the Moto mods with an eye-catching design, brilliant display, and great performance to provide you with an excellent higher midrange smartphone.

The Moto Z3 Play features a midrange chipset, the Qualcomm Snapdragon 636, with the standard configuration i.e. an octa-core Kryo processor, an Adreno 509 GPU, and 4 GB of RAM. The performance of the Moto Z3 Play is impressive and the smartphone can easily handle HD gaming and video playback without erring in speed or reliability. If you are looking for a smartphone that can easily handle day-to-day tasks with the occasional movies and games then the Moto Z3 Play is a great choice for you. The smartphone has an admirable score of 115000 in the AnTuTu 7 benchmark which is on par with most other midrange smartphones.

The camera setup on the Moto Z3 Play is impressive with a dual rear camera that consists of a 12 MP primary sensor and a 5 MP secondary sensor, and a 8 MP front camera for selfies. The primary sensor on the rear has dual pixel autofocus and dual tone dual LED flash while the secondary sensor doubles as a depth sensor for portraits and improved detail. There is no optical image stabilization on the Moto Z3 Play though so you can expect a few images to be blurry. The overall image quality is impressive though and the colors are lively and pleasant. The dynamic range could be a bit wider but the smartphone does well in both daylight and dark conditions. As for the selfie camera, it is a lackluster camera that you can use for the occasional selfie to post on the social media.

The Motorola Moto Z3 Play has a small 3000 mAh non-removable battery that does not impress on its own. With moderate use, you can just about last through a single day with a fully charged Moto Z3 Play. However, the convenience with the Moto Z series are the magnetic connectors on its back that can provide a range of added functionalities through Moto Mods, which include a secondary battery as well. There is fast charging (15 W Turbo Charge) on the Moto Z3 Play too so you can take your phone from 0 to 100% in just a little over an hour.
As for connectivity, the Moto Z3 Play has all ends covered with Bluetooth 5.0, NFC, FM Radio, USB 3.1 Type-C connectivity, and USB OTG.